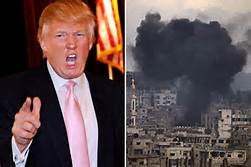 The Attack on Syria was. real but limited --- for the moment. According to the information had by Paul Craig Roberts, the Joints Chiefs prevailed over the Neo-Con ideologues and prevented an attack that would have brought a military Russian response. Apparently, the Syrians shot down most of the missiles and attacks on known Russian assets were avoided. No body, however, thinks that the Syrian Conflict is over. Obviously, from this information, the world is one step away from World War III, but  still, as of April 14, 2018, still one step away.

Dr. Chojnowski: Please pray for my father who has open heart surgery next week. His name is Edward.