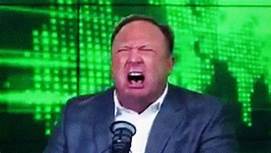 Not to say that Alex Jones is the embodiment of the American "right," but his fanatical support for Trump, even when the president showed that he was going to do the opposite of what he campaigned on, makes this response to the Syrian War/World War III all the more shocking. It is by no means only him, Pat Buchanan, Ann Coulter, Mike Savage, and the thousands who signed the unsuccessful petition whose first signature was that of RadTrad Thomist, happily testify to the fact that there is opposition on the right to the small clique of hard-core Neo-Cons, who not only control Fox News but also the current Trump administration. And the Democrats, following in the tradition of the Clinton "crap," they are lining up behind this illegal attack on a sovereign nation without presenting evidence which would testify to Syrian government involvement in the chemical attack or asking for a vote of Congress which is required by the United States Constitution.

I think the tears of Alex are sincere. Why aren't we all crying.