Trying to be "More Traditional" than the SSPX: Fraternity of St. Peter Goes Rad Trad for Holy Week. Vatican Gives Permission to Use Pre-Hannibal Bugnini Holy Week. BUT, still kneel for the Jews. Does this mean ALL BLACK Good Fridays Again? 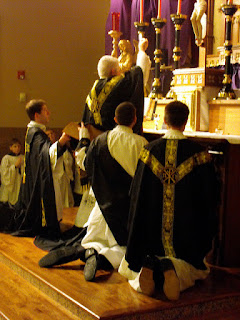 So we will be being faithful to Bugnini and the Vatican-approved Fraternity won't? I told you things were getting weird!
I believe it was Fr. Carl Pulvermacher who said, "They will allow the traditional Mass when they run out of validly ordained priests." Is the Fraternity trying to draw from both the SSPX AND the CMRI?
From Gloria TV
Blowoff, Vatican Allows Easter Rites Prior to the Reform of Pius XII
The Priestly Fraternity of St Peter has been granted an indult by the Vatican Commission Ecclesia Dei to use the liturgical books for Holy Week as they were until the [failed] reform of Pius XII (+1958). The indult is granted ad experimentum for three years.

The information was published in several of the Fraternity’s US-parish bulletins. Each church of the Fraternity has to request permission from the superiors before taking advantage of the indult. According to rumours, 25 parishes have been granted permission so far.

However, on Good Friday, the prayer for the Jews published by Pope Benedict XVI must be used.

Also from en.news French Monastery Celebrates Easter According to the Missal of 1953