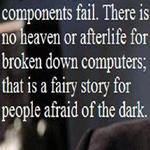 
What is interesting about the missionary atheist Hawking, however, is the way in which he does not draw from this order the obvious conclusion that was drawn, for example, by Sir Isaac Newton who said that our habitable solar system did not “arise out of chaos by the mere laws of nature.”