From the "At Least it is Not the Great Apostasy" File: Irish Pubs Open on Good Friday for first time in 90 years...and Other Signs of the Times. 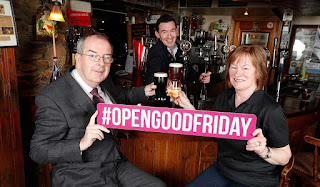 Here is the latest from Associated Press. For 40 Million Euros in Sales, the Irish join the mocking Jews and Romans at the Foot of Our Lord's Cross. Below this article are other links to recent events which are public acts of apostasy and acts of insult to the divine law. If people were not allowed to go to the pre-1955 Holy Week services --- with the new BXVI prayer for the Jews --- I would be REALLLLY upset.
When is the next conference?

The Title of this article should have been "When Irish Drinking Jokes are No Longer Funny"
02af4c13de4d49cfa0799790cf3ca03e
DUBLIN (AP) — Guinness is flowing in Irish pubs on a Good Friday for the first time in 90 years.
Lines of people were reported as pubs opened at 7 a.m. to serve alcohol, thanks to legislation that overturned the 1927 ban on pubs opening on Good Friday in time for thirsty locals and tourists.
The Vintners’ Federation of Ireland welcomed the change, saying it would add 40 million euros ($49 million) in sales. Chief executive Padraig Cribben said “the Good Friday ban is from a different era and is rightfully consigned to history.”
Cribben said the change meant pub owners now had a choice whether to open, “like all other businesses who were never subject to a ban.”
The closing requirement had often surprised tourists arriving in Ireland for the long Easter weekend.
The Intoxicating Liquor Act of 1927 prohibited the sale of alcohol on Christmas Day, Good Friday and St. Patrick’s Day. The St. Patrick’s Day ban was lifted in 1962.

Just a Reminder. Recently the Irish passed by Referendum ---- something that even the Protestant United States did not do (it was imposed on us by the Catholic Republican Supreme Court)--- a law authorizing Sodomite Couples to "marry."

But at least we have our Catholic Universities --- where the basketball is great! --- where our young people, are being prepared by their parents and their professors for "real life,"  since  they "have to earn a living," can hear this from their well-endowed chaired professors. Like at Holy Cross University (disclaimer: I had a teacher in high school from Holy Cross [1981], seminarian in fact). N.B., if utter blasphemy of the filthiest kind disturbs you, you might want to avoid this article, widely distributed by Breitbart:

Well at least our Holy Father is the rock of faith and sanity that Our Lord promised us that he would be. Here are some interviews with Scalfari who Francis keeps going back to and as even indicated that he is his favorite journalist --- an atheist, of course --- even though the Holy Father is being continually misquoted and misrepresented by him, according to the Opus Dei Press office in the Vatican.....don't worry, keep that supernumerary money coming in........

Pope Francis: 'There Is No Hell' - cnsnews.com
I wonder why he canonized Jacinta and Francisco --- since he just nullified the First Secret given to the Children by Our Lady at Fatima.

Pope Francis assures atheists: You don’t have to believe in ...
Faith is not necessary to go to Heaven.
What was that Miracle of the Sun about? An encouragement to dialogue with the Masonic atheists in attendance, duh!

Just a snibbit from this newspaper report from the totally unreliable journalist who has put out one shocking thing after another about the beliefs of Francis, yet who Francis keeps going back and back to in order to get his message out.

Pope Francis has been making headlines ever since he was elected the Roman Catholic Church’s leader six months ago, and now he’s getting even more attention. “I believe in God, not in a Catholic God,” he said in an interview, essentially taking a dig at the Catholic Church hierarchy by condemning its “Vatican-centric view.”
“I believe in God, not in a Catholic God. There is no Catholic God, there is God and I believe in Jesus Christ, his incarnation,” the pope said in the interview with the Italian newspaper La Repubblica, as quoted by the Inquisitr. “Jesus is my teacher and my pastor, but God, the Father, Abba, is the light and the Creator. This is my Being. Do you think we are very far apart?”
The 76-year-old Argentinean pontiff added he does not agree with everything his religion stands for: “This Vatican-centric view neglects the world around us,” he said. “I do not share this view, and I’ll do everything I can to change it.”
At Least Sister Lucy has said things that bolster the Catholic Faith and Warn Us about the Dangers of Our Time! Russia has been Consecrated and Converted. The Triumph of the Immaculate Heart Has Already Happened. The Third Secret is about the great saint and pope John Paul II. The Third Secret was not supposed to be released to the world by 1960. 1960? Never heard that. The New Mass is fine. Communion in the Hand is fine. Everything is FINE.

Wake me when we get to the Great Apostasy, please. Clearly, "Rome Will Lose the Faith" is clearly something that will not happen for a long time.  Maybe Michael Matt can come out of his skull-lined catacomb on one day every year to assess the situation! 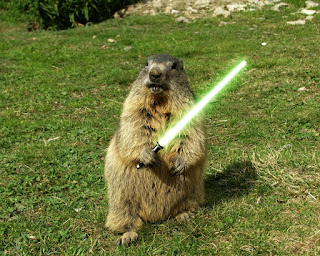 AT LEAST THIS APOSTASY IS NOT FORMAL, PERTINACIOUS, NON-OCCULT, EXTERNAL, AND IMPOUNDED! IF IT WAS, WE WOULD BE IN REAL TROUBLE!