Are All the Deceivers Going to be Sainted? Prove them Wrong. 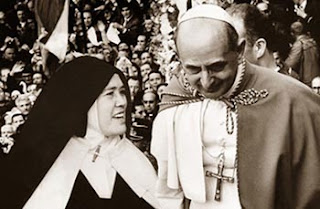 If there was not a more perfect way of proving that the line from John XXIII through Paul VI to John Paul II WERE NOT SAINTS is to show that they perpetrated one of the most diabolical frauds in the history of the Catholic Church --- put forward to the world a fake sister lucy. IF an investigation proves this to be the case, then the fate of the real sister lucy and the use of the fraud to publicly endorse everything that newly "canonized" NewChurch has done over the course of the last 60 years wll testify against the holiness of these men --- in fact, it will scientifically prove the contrary. I know that I am saying a lot here, such is my intent.

If you are interested in making a tax deductible donation to sister lucy truth, write me at justicepc@yahoo.com and I will give the necessary numbers for a wire transfer or if you would like to send a check, please use the Otis Orchards, WA address indicated above.
Now for a part of the article on the "sainthood" of exactly them men who tried to destroy the Catholic Church --- how perverse can this situation be?

BLOGS   |  FEB. 17, 2018
Pope Francis: Blessed Paul VI to Be Canonized This Year
The Holy Father revealed the news in an informal conversation with Rome priests on Thursday.
Edward Pentin
Pope Francis has said he will proclaim Blessed Paul VI a saint later this year, and joked that he and Benedict XVI are “on the waiting list.”
At the end of a closed-door question and answer session with priests of Rome on Thursday, the Pope said it will be a “holy year” for Paul VI. "There are two Bishops of Rome who have recently become saints: John XXIII and John Paul II,” the Pope said. “Paul VI will become one this year. One cause for beatification is underway, John Paul I; his cause is open. And Benedict and I are on the waiting list. Pray for us."
Earlier this month, the Congregation for the Causes of Saints approved the second miracle needed for the canonization of Blessed Paul VI.
Pope Francis has yet to give his formal approval which would be in the form of an official decree, after which the date of his canonization in Rome will be announced. Some expect Paul VI to be canonized in the autumn, probably October, or possibly just before the summer holidays.
The miracle attributed to the cause of Paul VI is the healing of an unborn child in the fifth month of pregnancy. The case was brought forward in 2014 for study.
The mother, originally from the province of Verona, Italy, had an illness that risked her own life and the life of her unborn child, and was advised to have an abortion.
A few days after the beatification of Paul VI on Oct. 19, 2014, she went to pray to him at the Shrine of Holy Mary of Grace in the town of Brescia. The baby girl was later born in good health, and remains in good health today.
The healing was first ruled as medically inexplicable by the medical council of the congregation last year, while the congregation's consulting theologians agreed that the healing occurred through the late Pope's intercession.
The alleged miracle closely resembles the one that opened the way for Paul VI’s beatification. That first miracle took place in the 1990s in California when an unborn child was found to have a serious health problem that posed a high risk of brain damage. Physicians advised that the child be aborted, but the mother entrusted her pregnancy to Paul VI.
The child was born without problems and is now a healthy adolescent. He is considered to be completely healed.
Pope Paul’s cause for canonization was opened in 1993. In December 2012, Pope Benedict XVI recognized the “heroic virtue” of Paul VI, giving him the title “venerable.” He was beatified in Rome on Oct. 19, 2014.