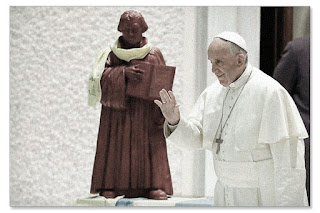 Just in....A Translation of an Italian article coming from information circulating at the Vatican. Francis will demand Oath of Fidelity to Himself and His "Magisterium" from all Clerics in the "Church." All who do not take this Oath will be Suspended from their duties. My question is who amongst the traditionalists will continue the theological game of Twister and find a way to take the oath by cosmic acts of "mental reservation."

Here is the Breaking News.....Be ready for a very intense 2018!
The Article whose translation Fr. Kramer says is 99% accurate:

"Drrafts part LVII: the danger of the schism. Oath of fidelity to the magisterium of Bergoglio "of Fra Cristoforo

I state that what is reported in the drafts comes from a source very much in the Vatican circles. And he tells me how important he feels about what he succeeds in "capturing" all the entourage that hangs out daily in Santa Marta. So I report exclusively what is "confided" to me. And the public for duty of Truth. I can tell you that the source is worthy of trust. Proof of this is the fact that so many drafts have now become sadly realized. Those who have not yet had implications, it is not that they will not happen. It is only a matter of time. Because, as you will have understood, things in Santa Marta can change from one day to another. It depends on the moods. We are simple ambassadors. And as they say: ambasciator does not bring penalty.

Clarified this we arrive at the Spiffero. In terms of "reforms" Bergoglio has always had very clear ideas. From the first moment of his pontificate he beat the nail on: migrants, ecology, ecumenism. With the publication of Amoris Laetitia he then sealed his "relativism" in matters of morality. These points are now established in the neochiesa. Now in almost all the Parishes you do not hear about anything else. The faithful and children are taught nothing but the "verb" Bergoglio. Like an obsession.

But as we have seen in these times, not all have aligned. And among these there are also Bishops and Cardinals. This is the concern of Bergoglio. Those who "resist". He can not stand it. He is stronger than him. Here then is what Santa Marta has been studying for a few months.

My source told me that a sort of "act of fidelity to the pope (obviously Omissis) and his magisterium" is under study. The small letters are desired.

This kind of "act of fidelity" will be required of all clerics of the Catholic Church, deacons, priests, bishops and cardinals. And it must be formally pronounced. In the various dioceses a day will be chosen in which all, bishop, priests and deacons will have to pronounce solemnly this formal act. Which means to promise "blind loyalty" to the "magisterium" and the teaching of Bergoglio. Of course it will be mandatory. Those who do not make this "promise" will have to consider themselves "suspended a divinis".

If this draft were to happen (I hope not), we will be at the turn. And I believe that nobody will save us from the schism. Also because how can we lend loyalty to a heretical magisterium?

In my opinion there will be a rift never seen in the history of the Church. The Neighbor of Bergoglio, and those who will remain faithful to the Traditional Teaching of the Church. And hence the total confusion.

Regarding the times, the source has not been unbalanced. He told me about a few months. He told me that the text is being prepared.

I think it's time to increase prayer. We strongly invoke the Madonna who can save us from this disaster. Let's do Eucharistic adoration. Let us pray to the Apostles, the Martyrs, the Saints, the Souls of Purgatory, the Archangels, the Angels. Let's move Heaven as much as possible. Because if such a thing happens, the battle will really be furious. We pray so much! Let us pray for one another, because none of us yields before the enemy. We also add fasting! At least who can do it!

It's true. The Lord has told us that the gates of hell will not prevail. But he did not tell us there will be no battle. The battle will be there. And it will be the decisive one.