Tridentina Malta reaffirms its information: Francis will make the 1962 liturgy mix with the 1969 modernist meal. Proof that every year of the 60s brought with it a New Devolutionary Stage of the Sacred Liturgy.

The Latest from Tridentina Malta

Recalling the liturgical changes of the 1960s

The changes in the liturgy began in the 1950s, with the revision of Holy Week and the first simplification of the rubrics in 1955. A further simplification occurred in 1961, leading to the publication of the 1962 Missal. Those changes set the stage for what was to follow, especially after Sacrosanctum Concilium.
The imprudence with Sacrosanctum Concilium which called for “noble simplicity” and for the rites to be “simplified”, without specifying what exactly that should entail, in my opinion, ensured that chaos was to follow. The transitional period before the implementation of the so-called Missa Normativa, which became the Novus Ordo Missae, had in fact many revisions. 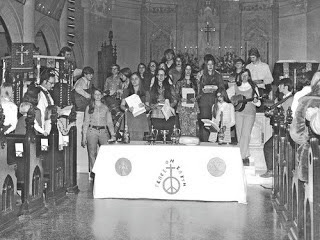 Mass around 1965.
The 1962 Missal, still in use to this day by traditional Catholics, started being changed almost immediately. In 1963, changes eliminated the Prayers at the Foot of the Altar, and eliminated the Last Gospel.

Massive changes occurred on Advent Sunday of 1965 in several places around the globe, including:
In 1967, the Canon, that most untranslatable prayer, which was expected to be retained in Latin was put in the vernacular.

Concurrent with the changes in liturgy came a lessening in discipline. Many priests in many churches told people not to worry if they missed Mass, supposedly because the Spirit of the Vatican Council IIwas throwing off the past rigidity.

The changes continued as more came into the liturgy. Communion in the hand, standing for Communion and the demolition of sanctuaries followed, along with anticipatory Masses on Saturday. A new set of variations to the order of Mass was issued in May 1967, following those implemented in March 1965.

Although Sacrosanctum Concilium insisted to “let the use of the Latin language be preserved... Gregorian chant as specially suited to the Roman liturgy ... should be given pride of place in liturgical services” was now de facto almost entirely thrown off.
Pro Tridentina (Malta), on the eve of 2018, will anxiously be waiting for the changes aimed at the 1962 Roman Missal, which this Blog had exclusively brought to the attention of the traditional Catholics worldwide some months ago.
Posted by Tridentina Malta at 12:03 PM