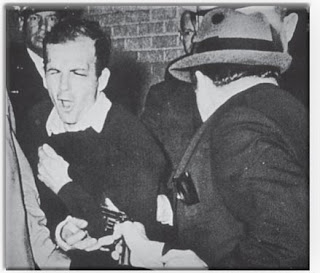 At noon, on a street in Dallas, the president of the United States is assassinated.  He is hardly dead when the official version is broadcast. In that version, which will be the definitive one, Lee Harvey Oswald alone has killed John Kennedy.
The weapon does not coincide with the bullet, nor the bullet with the holes. The accused does not coincide with the accusation: Oswald is an exceptionally bad shot of mediocre physique, but according to the official version, his acts were those of a champion marksman and Olympic sprinter. He has fired an old rifle with impossible speed and his magic bullet, turning and twisting acrobatically to penetrate Kennedy and John Connally, the governor of Texas, remains miraculously intact.
Oswald strenuously denies it. But no one knows, no one will ever know what he has to say. Two days later he collapses before the television cameras, the whole world witness to the spectacle, his mouth shut by Jack Ruby, a two-bit gangster and minor trafficker in women and drugs. Ruby says he has avenged Kennedy out of patriotism and pity for the poor widow.
—Eduardo Galeano, Memory of Fire, Vol. III: Century of the Wind
translated by Cedric Belfrage (NY: Pantheon Books, 1988), p. 183.


the following is from The People's Almanac #2,
by David Wallechinsky and Irving Wallace (NY: Bantam Books, 1978), pp. 47-52.
THE LAST WORDS OF LEE HARVEY OSWALD
Compiled by Mae Brussell

Did Lee Harvey Oswald act alone in shooting Pres. John F. Kennedy on Nov. 22, 1963, or did he conspire with others? Was he serving as an agent of Cuba's Fidel Castro, himself the target of American assassins? Or in squeezing the trigger of his carbine was he undertaking some super "dirty trick" for a CIA anxious to rid itself of a president whose faith in the "company" had evaporated in the wake of the Bay of Pigs fiasco? Or was he representing a group of Cuban exiles, the Teamsters Union, the Mafia? Indeed, was it Lee Harvey Oswald at all who killed JFK? Or was there a double impersonating Oswald? These questions continue to nag many people more than a decade and a half after that dreadful day in Dallas, in spite of the 26 volumes of hearings and exhibits served up by the Warren Commission, the congressional investigations, the release of heretofore classified FBI documents.
Almost everyone, it seems, has been heard from on the Kennedy assassination and on Lee Harvey Oswald's guilt or innocence, except one person—Lee Harvey Oswald himself. From the time of Oswald's arrest to his own assassination at the hands of Jack Ruby, no formal transcript or record was kept of statements made by the alleged killer. It was said that no tape recordings were made of Oswald's remarks, and many notes taken of his statements were destroyed.
Determined to learn Oswald's last words, his only testimony, The People's Almanac assigned one of the leading authorities on the Kennedy assassination, Mae Brussell, to compile every known statement or remark made by Oswald between his arrest and death. The quotes, edited for space and clarity, are based on the recollections of a variety of witnesses present at different times and are not verbatim transcripts. "After 14 years of research on the JFK assassination," Mae Brussell concludes, "I am of the opinion that Lee Harvey Oswald was telling the truth about his role in the assassination during these interrogations."