All Smiles Again in the Conciliar Church: Cardinal Muller Caves! Dubia gets nowhere. Fraternal Correction gets nowhere. Its full steam ahead for Conciliar Apostasy. 2018! 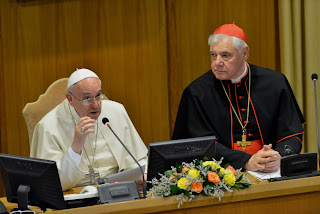 Dr. Chojnowski: Here is a recently released article by Andrea Tornielli published in La Stampa. Not that any of this is surprising. Why would someone who denies the physical resurrection of Our lord Jesus Christ defend the church's teaching on divorce and remarriage to the death if necessary? Rocco Buttiglione was a close friend of phenomenologist Dr. Damian Fedoryka and worked with Josef Seifert at his Philosophical Academy in Lichetenstein that was enthusiastically supported by fellow Phenomenologist john paul II. WHEN IS IT THAT WE FINALLY SAY, FOR THE GOOD OF SOULS, THAT "CONSERVATIVE CATHOLICS," INSOFAR AS THEY AGREE WITH THE TEACHINGS OF THE CONCILIAR CHURCH, ARE NOT CATHOLIC?

HERE IS THE LATEST FROM THE VATICAN: