Here are excerpts from an article by John Farrell in the Science Section of Forbes Magazine in which he speaks about the unanimous vote ------ where are the "Neo-Cons"? --- asking for a rehabilitation of the writings of Pierre Teilhard de Chardin on the part of the Pontifical Council for Culture. Teilhard, of course, is the arch-modernist whose pantheism cannot be remotely related to traditional Catholicism. I fully understood the pervasiveness of Teilhardianism when speaking to a scientist/philosopher/theologian who I knew well when he lived in Idaho, Wolfgang Smith. He said  that he used to be invited to conferences around the world to speak on the topic of science and religion --- he was a world class physicist that had worked for NASA --- until he wrote a book against Teilhard. When he presented his book, entitled Teilhardism and the New Religion, to an "Catholic" archbishop attending one of these conferences in Rome, the modernist cleric literally pulled back from receiving it. Dr. Smith knew from that moment that he would not be invited to any more of these conferences. He said that adherence to the theology and outlook of Teilhard was the sine qua non of being taken seriously in the Conciliar Church.
Does anyone think that Francis will say No? Notice he says that Paul VI, John Paul II, Benedict XVI --- especially Benedict XVI ---- along with Francis, have all used Teilhard's works and praised the man as a prophet and theologian. And notice Fr. Fessio's Ignatius Press --- established with the help and support of Josef Ratzinger to popularize the Neo-Modernists --- Henri de Lubac and Hans Urs von Balthasar, and (as a pea in the pod) the writings of Ratzinger himself, published a book by Ratzinger --- on evolution and drawing explicitly from the writings of Teilhard.
Here are some excerpts from Mr. Farrell's article:
This past week, leaders at a meeting of the Pontifical Council for Culture in Rome formally requested that Pope Francis lift the official disclaimer of the Catholic Church against the writings of the influential priest-scientist, Pierre Teilhard de Chardin (1881-1955).
Teilhard's writings were only published after the paleontologist's death in 1955. But by 1962, when the Vatican's Congregation for the Doctrine of the Faith issued the monitum, or warning, his posthumous works had attracted a large following. 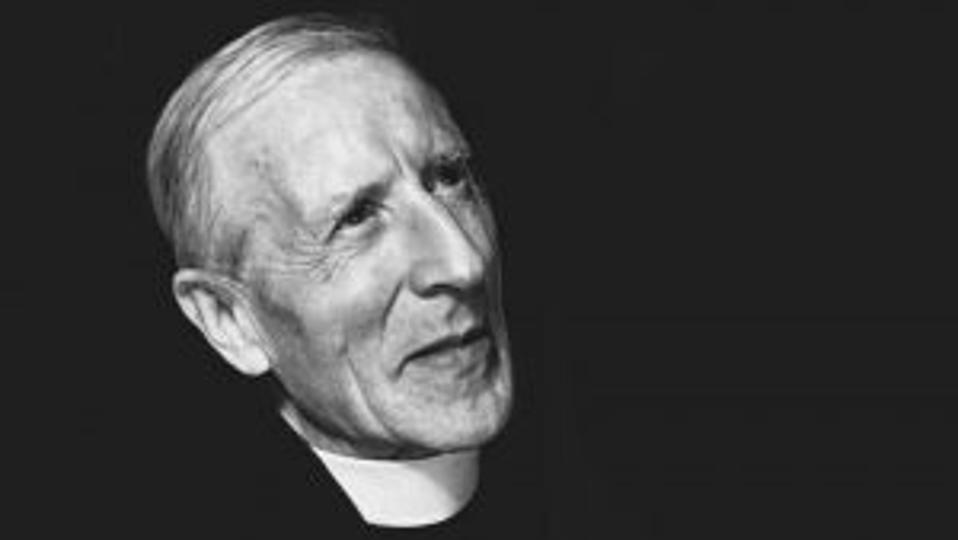 While Pope Paul VI is said to have had reservations about the warning, according to Gerard O'Connell, Vatican correspondent for Americamagazine, when he became pope after the death of John XXIII, Paul let it stand
According to O'Connell, those participating at the plenary assembly of the Pontifical Council for Culture on the topic of “The future of humanity: new challenges to anthropology” unanimously approved a petition to be sent to Pope Francis requesting him to waive the monitum.

They told Pope Francis that “on several occasions” during their discussions “the seminal thoughts of the Jesuit Fr. Pierre Teilhard de Chardin, anthropologist and eminent spiritual thinker, have been evoked.” They said, “we unanimously agreed, albeit some of his writings might be open to constructive criticism, his prophetic vision has been and is inspiring theologians and scientists.” They mentioned that four popes—Paul VI, John Paul II, Benedict XVI, and now Francis—had made “explicit references” to his work.

Indeed, Pope Benedict in particular, writing in the early 1970s as an academic theologian, evoked Teilhard's writing explicitly in a little known but striking essay on Creation and Evolution, which can still be found in this collection from Ignatius Press.