"Formally adhered" to the "Schism" Yet?: Well, What are we Waiting for! 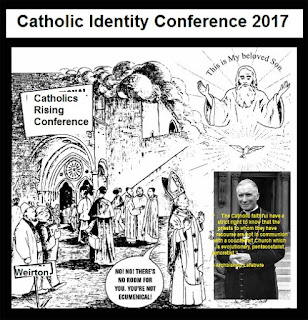 If the FSSP is founded on a completely modernist understanding of Tradition, why should we not call them....well, Modernists?

Wonder what Cardinal Burke and the Vatican would say about Michael Matt's equation of the SSPX with the Fraternity of St. Peter. I wonder what Archbishop Lefebvre would say? Can we just stop getting along please? Because, "getting along" is going to destroy our faith in the purity and the unchangeableness of the Catholic Faith.

And now, from the horse's mouth, what the Fraternity of St. Peter is all about. "To have the extraordinary form" "the love of my life" "within the Church."

Also, from the "With friends like this who needs enemies " file, Cardinal Burke shows his true allegiances. Hint, he will bow low before the Modernist Revolution (as he and his kind have done since the 1960s). Why do these kind of men get a "get out of heresy free" card when they come out against adultery? As my son says, "Ok, Mr. Dah!" Louie Verrecchio should be congratulated for opening the closet door on this Modernist, by getting hold of the following video. Notice Cardinal Burke says that the SSPX "is in schism" and to confirm this statement --- said that Fr. Saguto, District Superior of the Fraternity of St. Peter in North America, would confirm this -- the District Superior must obviously be in the room listing to the lecture.
Click the Link entitled "Cardinal Burke on FSSPX 7-15-2017 to listen to the SoundCloud --- We told you so!
SoundCloud cookie policyCookie policy
LouieVerrecchio
Cardinal Burke On FSSPX 7 - 15 - 2017