- September 23, 2017
Update: The example of Pope John XXII differs totally from the situation which exists now, to quote Charles Coulombe's account of the case in his book Vicars of Christ: A History of the Popes, p. 293,
Pope John XXII was involved in a theological controversy concerning the beatific vision. Even before he was pope, John XXII argued that those who died in the faith did not see the presence of God until the Last Judgment. He continued this argument for a time in sermons [apparently 3 times from what I have read elsewhere] while he was pope, although he never taught it in official documents. He eventually backed down from his position, and agreed that those who died in grace do indeed immediately enjoy the beatific vision.
Despite holding for many years a view widely held to be heretical, John XXII is not considered a heretic because the doctrine he had contradicted had not been formally defined by the Church until his successor, Benedict XII, addressed it by the encyclical Benedictus Deus, which formally defined this doctrine as part of Church teaching

What Cardinal Burke says about the idea of papal heresy to the Catholic World Reporter, December 8, 2016

CWR: Some people are saying that the pope could separate himself from communion with the Church. Can the pope legitimately be declared in schism or heresy?

*"In addition, [by this Our Constitution, which is to remain valid in perpetuity We enact, determine, decree and define] that if ever at any time it shall appear that any Bishop, even if he be acting as an Archbishop, Patriarch or Primate; or any Cardinal of the aforesaid Roman Church, or, as has already been mentioned, any legate, or even the Roman Pontiff, prior to his promotion or his elevation as Cardinal or Roman Pontiff, has deviated from the Catholic Faith or fallen into some heresy:
(i) the promotion or elevation, even if it shall have been uncontested and by the unanimous assent of all the Cardinals, shall be null, void and worthless..."
Cum ex Apostolatus Officio - Apostolic Constitution of Pope Paul IV, 1559

*"Now when [the Pope] is explicitly a heretic, he falls ipso facto from his dignity and out of the Church, and the Church must either deprive him, or, as some say, declare him deprived, of his Apostolic See."
St. Francis de Sales, "The Catholic Controversy" (16th century)
*"...a pope who is a manifest heretic by that fact ceases to be pope and head, just as he by that fact ceases to be a Christian and a member of the body of the Church; wherefore he can be judged and punished by the Church. This is the judgement of all the early fathers, who teach that manifest heretics immediately lose all jurisdiction."
St. Robert Bellarmine, "On the Roman Pontiff" (16th century)
*"If God permitted a pope to be notoriously heretical and contumacious, he would then cease to be pope, and the Apostolic Chair would be vacant."
St. Alphonsus de Liguori, "The Truths of the Faith" (18th century)
*"A pope can only be deposed for heresy, expressed or implied, and then only by a general council. It is not strictly deposition, but a declaration of fact, since by his heresy he has already ceased to be head of the Church..."
A Catholic Dictionary, 1951. Pope, Deposition of a
*"No canonical provisions exist regulating the authority of the College of Cardinals /sede Romana impedita/, i.e., in case the pope became insane, or personally a heretic; in such cases it would be necessary to consult the dictates of right reason and the teachings of history."
Catholic Encyclopedia, 1913. [Vol. III. p.339] Cardinal
*"The councils of Constance and Basle, and Gallican theologians, hold that a council may depose a pope...(2) /ob fidem/ (on account of his faith or rather want of faith, i.e. heresy). In point of fact however, heresy is the only legitimate ground. For a heretical pope has ceased to be a member of the Church, and cannot, therefore, be its head."
Catholic Encyclopedia, 1913. [Vol. IV p.435] Councils
*"An heretical pope necessarily ceases to be head of the Church, for by his heresy he is no longer a member thereof: in the event of his still claiming the Roman see a general council, improperly so-called because without the pope, could remove him. But this is not deposition, since by his own act he is no longer pope."
A Catholic Dictionary, 1951. Deposition

*"Finally they cannot be numbered among the schismatics, who refuse to obey the Roman Pontiff because they consider his person to be suspect or doubtfully elected on account of rumors in circulation..."Wernz-Vidal: Ius Canonicum, Vol vii, n. 398
*"Nor is there any schism if......one suspects the person of the pope or the validity of his election, or if one resists him as the civil head of a state."
Szal, Rev Ignatius: Communication of Catholics with Schismatics, CUA, 1948, p.2

*"Neither is someone a schismatic for denying his subjection to the Pontiff on the grounds that he has solidly founded ['probabiliter'] doubts concerning the legitimacy of his election or his power [refs to Sanchez and Palao]." de Lugo: Disp., De Virt. Fid. Div., disp xxv, sect iii, nn. 35-8 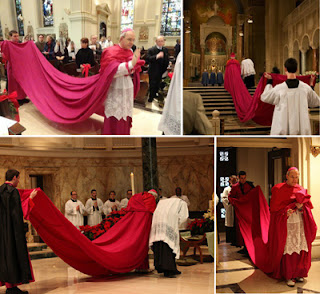 Above is a selection from Francis' Homily at Casa Santa Marta on Friday, May 19, 2017, on the same day as the speeches of the dubia signatories, Cardinal Burke and Cardinal Caffarra, at the Rome Life Forum. Then, there is a video which seems like it is from Anonymous that speaks of the "filial admonition" given on August 11th to Francis. He did not respond, so the letter was made public.