The True Meaning of Vatican Council II: A Guest Post by Louie Verrecchio

It is often suggested in “conservative” Catholic circles that the faithful - clergy and laity alike – are awaiting the day when a Roman Pontiff will provide all concerned with an official interpretation of the text of Vatican Council II.

In a 2013 interview with Michael Voris (before he shifted gears), for example, Bishop Athanasius Schneider expressed the necessity of a magisterial act, in light of conciliar ambiguities, that will "give us clear, very clear, interpretations of some very specific subjects."

This wasn’t the first time he had made such a suggestion. In an address given in 2010, Bishop Schneider called for “a conciliar Syllabus with doctrinal value.”

He went on to say in this same address:


“In the hermeneutical uproar of contrasting interpretations and in the confusion of pastoral and liturgical applications, the Council itself united with the Pope appears as the one authentic interpreter of the conciliar texts.”

Like most things associated with “hermeneutic-of-continuity” conservatism, there is a gaping logical hole in Bishop Schneider’s clarion calls for conciliar clarity. Think of it as an elephant in the room that either he does not see, or dares not acknowledge ... nay, make that four elephants in the room, each one wearing white - men by the names of Paul VI, John Paul II, Benedict XVI and Francis.

The contradiction in Bishop Schneider's reasoning should be obvious enough:

On the one hand, he is entirely correct in saying that “the Council itself united with the Pope” is the solitary source of an “authentic” interpretation of the conciliar texts. In other words, he knows very well that the true meaning of the Council’s teachings will only be made known to us by the popes, and by extension, those who exercise authority in the Church in union with him.

The lacuna in his presentation, however, is simply this:

Each of the four aforementioned popes have already provided, and continue to provide, precisely what Bishop Schneider and others have been demanding.

In other words, as I write in August of 2017, the true meaning of Vatican Council II and the propositions set forth in the sixteen documents it produced is perfectly clear; no ambiguity whatsoever remains.

Since the time of Council’s closing up to the present day, we have been given countless encyclicals, exhortations, constitutions, letters, and other documents of various sorts; along with allocutions, speeches, sermons and assorted reflections; complimented by any number of meetings, symposiums, liturgies and services courtesy of the popes (and those who serve in the Roman Curia at his pleasure) providing “clear, very clear, interpretations” of every single one of the most controversial portions of the conciliar texts.

Has it never occurred to our “conservative” friends that all of the above mentioned papal and Curial instruments are heavily, and at times exclusively, footnoted to the text of Vatican Council II and other post-conciliar so-called “magisterium” based largely upon the same?

Have they not read the inaugural Encyclical of Paul VI, Ecclesiam Suam, which in setting forth the direction of his papacy deferred countless times to the thrust of the Council; even as it was still in session?

The Ecumenical Council will give us new and profitable instructions, and we should be preparing ourselves even now to welcome them and to put them into effect. – Paul VI

Did they simply forget that the entire pontificate of John Paul II was specifically ordered on providing exactly the interpretation that they claim to await?

For me, then - who had the special grace of participating in it and actively collaborating in its development - Vatican II has always been, and especially during these years of my Pontificate, the constant reference point of my every pastoral action, in the conscious commitment to implement its directives concretely and faithfully at the level of each Church and the whole Church. – John Paul II

Do they not know that Benedict XVI made it the mission of his own pontificate to continue where his predecessor left off?

I too, as I start in the service that is proper to the Successor of Peter, wish to affirm with force my decided will to pursue the commitment to enact Vatican Council II… - Benedict XVI

Will they deny that Pope Francis has taken up the conciliar cause with renewed and unprecedented vigor?

One of the reasons why conservatives imagine that we are still awaiting an “official” conciliar interpretation, I suspect, lies in the fact that nothing coming from Rome thus far relative to the Council’s novelties has been given to us in such way as to be binding.

On this point, they wait in vain. Why? Because the Council itself is non-binding!

As the note found in the Appendix of Lumen Gentium states:


“Taking conciliar custom into consideration and also the pastoral purpose of the present Council, the sacred Council defines as binding on the Church only those things in matters of faith and morals which it shall openly declare to be binding.”

As most readers of this space know very well, the Council openly declared exactly zero propositions as binding. The only things found in the conciliar text that can properly be considered as such are simply reiterations of that which was already binding on the faithful prior to the Council.

As for the conciliar novelties (i.e., the sources of controversy and confusion in the text), these things can never be presented as binding upon the faithful for the simple reason that they deviate from tradition.

As such, the most that the popes can do with respect to providing an “authentic interpretation” of these conciliar novelties is to make known their true meaning via the various instruments and activities previously named (encyclicals, exhortations, constitutions, letters … allocutions, speeches, sermons … complimented by any number of meetings, symposiums, liturgies, etc.)

At this, please allow me to provide a limited bullet point overview of the true meaning of certain conciliar novelties as made known with searing clarity by both the text of the Council itself, and the words and deeds of the popes who have reigned over the past fifty or so years:

Given that the communities of the heretics are henceforth considered “means of salvation” in themselves, and their liturgical services are now viewed as “engendering a life of grace” and “capable of giving access to the community of salvation,” it is no longer necessary to seek their conversion to the Holy Catholic Church. This realization opens the way for all manner of joint activities; even going so far as to celebrate the life of Martin Luther!

Now that we understand that God made the Jews of today and the Gentile followers of Christ “one in Himself,” we are able to say that the salvation of the Jews is not at risk simply because they reject Jesus. As such, they are henceforth to be looked upon as “brothers,” and the Church for her part has no mission to convert them.

Come to think of it, the Church, while acknowledging in theory the mission of converting other non-Christians to Christ, shall henceforth place such primacy on dialogue as to prevent us from issuing any explicit invitations to conversion.

Since the bishops together with the pope govern the Church, it is well for the Church to assemble Synods of Bishops in order to facilitate agreement on essential matters of doctrine. It is also necessary to set in motion the conversion of the papacy, as well as the central structures of the universal Church, in such way as to acknowledge the doctrinal authority of the various episcopal conferences; a work that as yet remains to be done.

In recognition of our duty of foster whatever can promote union among all who believe in Christ (i.e., among Catholics and heretics), it is necessary for the Mass to conform as closely as possible to the liturgical actions and underlying theologies of the heretics. In practice, this means stripping the Rite of Mass of those elements that necessarily disturb the Protestant conscience; e.g., those sacred signs that point to the sacrificial nature of the Mass, the expiation of sin that is its purpose, the unique role of the priest, the Real Presence of Christ, etc.

The new rite must be made easily understood by all, even (and perhaps especially) non-Catholics. As such it shall adopt various cultural elements, including local language and music.

Though it has taken nearly two millennia, it now occurs to us that man has the right to choose, practice and change his religion at will, and this right endures even if he neglects the duty to seek religious truth. As such, the Church will stand with the Jews in defense of their right to reject Christ, likewise the Muslim, and even the atheist.

This necessarily means that the Social Kingship of Christ as taught in Quas Primas is no longer worthy of preaching.

I could go on, but hopefully the “very clear, interpretations” of the “very specific subjects" given above will suffice.

Bear in mind, they don’t come from me; rather, these interpretations have been made perfectly plain in the words and deeds of the post-conciliar popes and the bishops who rule in union with them.

Indeed, it can be said that these popes have performed impeccably as “authentic interpreters of the conciliar texts;” leaving precious little room for confusion as to what they truly mean.

This being the case, we do not await, as our “conservative” friends maintain, a pope who will provide an authentic interpretation of Vatican II; we await the glorious day when a pope will condemn it! 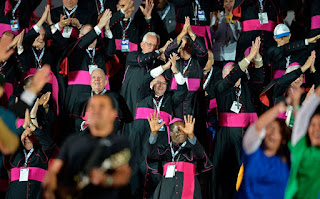