Fr. Gruner in October 2014: A Man Must be Catholic in Order to be Pope; Benedict did not validly Resign His Office

To view the video clearly, go down the blog page and slide the bar to center the video.

In a Fatima Center video entitled, "Questions about Pope Francis" uploaded on October 4, 2014, John Vennari is interviewing Fr. Nicholas Gruner. In this interview, Father is answering questions posed by viewers. The interview starts off with a discussion of the question of whether a marriage is valid even though the couple does not want to have children.

However, the questioner then moves on to the topic of Francis, could he not have had "the right intention" from the very beginning of his papacy. Fr. Gruner sums up the question by posing the question to himself, "Could the election of a pope be invalid?" Are there things [that would exist or occur] which would make the election of a particular pope invalid? To this question, Fr. Gruner responds, "Yes." The first condition for disqualification considered is whether a man could be validly elected if he were a heretic and not Catholic. Would the election of such a man be valid? Father brings up a historical case in which the majority of the Cardinals voted for a man, but St. Bernard and St. Norbert said that on the basis of what the papal candidate stood for he was not Catholic; hence it was obvious to everyone that "he cannot be the pope, he is not Catholic. This fact -- the fact of the man having publicly defected from the faith -- made it obvious to everyone that "he cannot be pope, he is not a Catholic." This fact allowed St. Bernard and St. Norbert to declare the election in the conclave invalid --- notice that Father Gruner is emphasizing that it was lack of Catholicity that rendered his election invalid, not just a problem with procedure. Fr. Gruner says St. Bernard did not have access to the details of the conclave to make a canonical or procedural argument, he simply said, "He is not Catholic, he cannot be pope."

After stating this, Father gets back to the general question of whether there are things that would make a papal election invalid. He answers in the affirmative. "But those are very specific things, but if he is not Catholic from the beginning [he cannot be validly elected pope]." He then states, "Now there are those that say this about Pope Francis, that he has never been Catholic, he has not been Catholic for a long time, if ever. But that is another subject." Fr. Gruner then paraphrases statements of Francis, "You do not have to be Catholic to be saved," "You should not be evangelizing." Then he brings up the question, "If the pope tells you to do something, do you need to obey him?" Father here seems to be changing the subject from the question of the validity of papal elections, but he is not. He then says, in this regard, "the first rule is, does he have jurisdiction for that?

A little later, Father brings up the heresy that "there is salvation outside the Catholic Church" and attributes this attitude and statement to Francis. Father than says he does not know whether Francis is a formal or a material heretic. "If this is something that is so foundational to his personality, it can be argued that he is not Catholic." Father than raises the fact that, at the time [Fall or Summer 2014 --- it is not completely clear when the video was filmed] Antonio Socci was coming out with a book which says that Benedict is still the pope and did not resign validly. He says that he had not, as yet, read the book, which was to be released in October 2014. John brings up, "This is what happens when proper procedure is not followed." Father then brings up the point that the munus (the office) was not given up in the resignation. John then gives voice to the which that Benedict had continued on until the end of his life. Fr. Gruner then brings up an article that he had read in Italian by a canonist who teaches in the faculty at the Universities of Bologna and Modena and at a Swiss university; this professor was quoted, by Fr. Gruner, as saying that Benedict was very clear that he was not resigning the munus (office) of the papacy, but the "active ministry." Fr. Gruner then reiterates that there is no such distinction, if you have the office you have the ministry. Concludes by then saying that no one should "leave the Church" because of the question of whether Francis is pope or Benedict is pope.

Of course, the question that John does not ask Father directly is, "Is Francis Pope?" 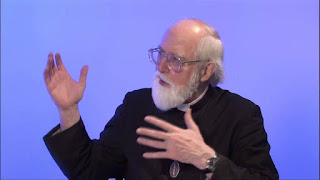