Cornelia Ferreira's Fatima Newsletter: What the Children would endure to safeguard the Integrity of the Three Secrets

- August 16, 2017
In this newsletter for August,  Cornelia presents the full and authentic message given by Our Lady to the Children at Fatima exactly 100 years ago during her delayed appearance on August 19, 1917. What is profound here is not only Our Lady's message and her promise of a miracle for October, but also, the lengths to which the Children would go to protect the Secrets given to them by Our Lady --- especially, we think of here the Third Secret. When we remember how long it to Sister Lucy to write down the Third Secret in the 1940s, even when instructed to do so by her bishop, we can surmise the gravity of the theme. Apostasy in the Catholic Church --- from the highest levels, would certainly qualify as such a terrible thought to a faithful Catholic, especially children and a devote nun. Just as the Apostles' martyrdoms --- and the attempted one on St. John --- argue for the truth of what they presented concerning the teaching, person, and resurrection of Our Lord Jesus Christ, surely the willingness of the Three Children to accept martyrdom at the hands of the Masonic mayor testifies to the absolute truth of what they said and would say later.

Now we have Cornelia Ferreira's presentation of the Apparition of August to the Three Children of Fatima:

[Two days before the 13th of August, I (Lucia)
was] to appear at a given hour before the
Administration in Vila Nova de Ourém. This
meant we had to make a journey of nine miles, a
considerable journey for small children. The only
means of transport in those days was either our
own two feet or to ride on a donkey.
They put me on a donkey and off I went,
accompanied by my father and uncle. I fell off
the donkey three times along the way. Jacinta
and Francisco suffered that day, thinking that I
was going to be killed. As for me, what hurt me
the most was the indifference shown me by my
parents. I remember thinking to myself as we
went along:
“I must be patient,” I reminded myself in my
inmost heart, “since this means I have the
happiness of suffering more for love of You, O
my God, and for the conversion of sinners.” This
reflection never failed to bring me consolation.
At the Administration office, I was interrogated
by the Administrator, in the presence of my
father, my uncle and several other gentlemen
who were strangers to me. The Administrator
was determined to force me to reveal the secret
and to promise him never again to return to the
Cova da Iria. To attain his end, he spared neither
promises, nor even threats. Seeing that he was
getting nowhere, he dismissed me, protesting
however, that he would achieve his end, even if
this meant that he had to take my life. He then
strongly reprimanded my uncle for not having
carried out his orders [to bring Francisco and
Jacinta to see him], and finally let us go home.

The Children are Jailed

The 13th day of August had dawned. Ever
since the previous evening, crowds had been
pouring in from all parts. They all wanted to
see and question us [the three children], and
recommend their petitions to us, so that we
could transmit them to the most Holy Virgin.
In the middle of all that crowd, we were like a
ball in the hands of boys at play. We were
pulled hither and thither, everyone asking us
questions without giving us a chance to answer
anyone.
In the midst of all this commotion, an order
came from the Administrator, telling me
[Lucia] to go to my aunt’s house, where he was
awaiting me. My father got the notification and
it was he who took me there. When I arrived,
he was in a room with my cousins [Francisco
and Jacinta]. He interrogated us there, and
made fresh attempts to force us to reveal the
secret and to promise that we would not go
back to the Cova da Iria. As he achieved
nothing, he gave orders to my father and my
uncle to take us to the parish priest’s house.
[The children were kidnapped there by the
Administrator and put into jail in Ourém,
where he threatened to throw them into a tank
of boiling oil if they did not reveal the secret to
him. Meanwhile, signs at the Cova made the
crowd realize that Our Lady had come, but
since the children were missing, She had
returned to Heaven.
The Administrator released the children on
August 15th and Our Lady was to visit them
at another location on the 19th of August.

Our Lady appears in spite of Masonic Plot

I was accompanied by Francisco and his brother
John. We were with the sheep in a place called
Valinhos, when we felt something superatural
approaching and enveloping us. Suspecting that
Our Lady was about to appear to us, and feeling
sorry lest Jacinta might miss seeing Her, we asked
John to go and call his sister. As he was unwilling
to go, I offered him two small coins and off he ran.
Meanwhile, Francisco and I saw the flash of light, 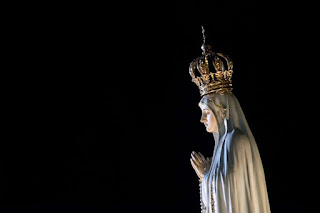 which we called lightning. Jacinta arrived, and a
moment later, we saw Our Lady on a holmoak.
“What do you want of me?”
“I want you to continue going to the Cova da Iria
on the 13th, and to continue praying the Rosary
every day. In the last month, I will perform a
miracle so that all may believe.”
“What do you want done with the money that the
people leave in the Cova da Iria?”
“Have two litters made. One is to be carried by
you and Jacinta and two other girls dressed in
white; the other one is to be carried by Francisco
and three other boys. The money from the litters
is for the ‘festa’ of Our Lady of the Rosary, and
what is left over will help towards the
construction of a chapel that is to be built here.”
“I would like to ask you to cure some sick
persons.”
“Yes. I will cure some of them during the year.”
Then, looking very sad, Our Lady said:
“Pray, pray very much, and make sacrifices for
sinners; for many souls go to hell, because there
are none to sacrifice themselves and to pray for
them.”
And She began to ascend as usual towards the
east.