- July 19, 2017
First guest post by Louie Verrechio on the new phenomenon of diocesan clergy questioning the validity of Benedict's resignation and Francis' subsequent election. Here is the post.


Some readers of this space may already be familiar with Fr. Ray Blake; a tradition-minded priest and outspoken blogger of the Diocese of Arundel & Brighton in southern England. Those who are not, even among those who will never read the following, probably will be soon.


“My theory about Benedict XVI’s resignation is that one key factor was the threat that his brother George might be implicated not only in the physical abuse but also in the sexual abuse of school pupils. Even if it was untrue, a Pope who had made it his work to deal with the cases of sexual abuse and the dismissal of abusers from the clerical state would be placed in an untenable situation if his beloved brother was caught up sex abuse scandal. Mud would have stuck and clung more deeply to the Church, he would have become the Pope with the abusing brother.


If one adds papers and objects being removed from Benedict’s own study, his blindness in one eye and increasing lameness, the pressure from groups like St Gallen mafia and Cardinal Martini, as well as his own desire to move away from Papacy of his larger than life immediate predecessors and return it to the restrictive fences laid around it by the First Vatican Council, his resignation would seem entirely reasonable.”    [Emphasis added.]


The reason I’ve chosen to emphasize portions of Fr. Blake’s text should be obvious.


While Fr. Blake concluded that Benedict’s “resignation would seem entirely reasonable,” he is most certainly aware of the fact that, if his theory is correct, the resignation would absolutely be entirely invalid as well.


According to the Code of Canon Law:


“If it happens that the Roman Pontiff resigns his office, it is required for validity that the resignation is made freely and properly manifested but not that it is accepted by anyone.” (Canon 332 §2)


I don’t know much about Fr. Blake’s ordinary, Bishop Richard Moth; at least at present.


That said, I might suggest that his reaction (or lack thereof) to this blog post wherein Fr. Blake essentially opines that Benedict’s resignation may have been invalid - a theory that necessarily calls into question the validity of the conclave that followed, to say nothing of the heretic they elected - just might give us all of the insight we need.


In any case, I applaud Fr. Blake for his willingness to address this elephant in the room that most are pleased to ignore. 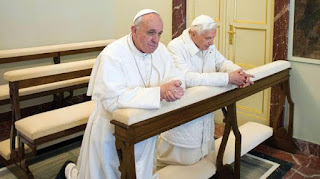