Fr. Stephen Abdoo, the first priest of the SSPX to die --- one year after his ordination to the priesthood in 1987, is a person very dear to my family. I have visited the Abdoo's in Sydney, Australia a number of times --- 6 years ago even having the honor of staying in the room that Fr. Abdoo occupied when he was living at home. His own scapular still hangs in the room. His sister is the godmother to one of my daughters and one of my sons. My wife had the honor of attending his "first mass" in 1986 on the feast of St. Anne, July 26th and was actually on the phone with his sister when the family got the tragic news of Fr. Stephen's death, on the feast of St. Anne exactly one year after his first mass. His mother told me that Archbishop Lefebvre was so saddened by Fr. Abdoo's death that he could not even attend the funeral. Presented below is a letter sent shortly before his death to the bishops of the Conciliar Church asserting the rights and legitimacy of Tradition in the face of Modernist apostasy. Fr. Stephen Abdoo is interred next to Archbishop Lefebvre in the seminary church in Econe, Switzerland. 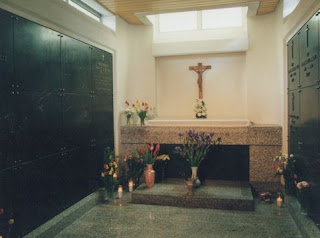