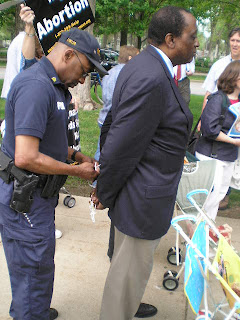 Alan Keyes holds his Rosary while being handcuffed

On Friday May 8, Alan Keyes was arrested at Notre Dame protesting the university’s decision to honor President Obama with the commencement speech and an honorary law degree.

Obama is scheduled to be appear at Notre Dame on May 17.

Dr. Keyes arrived at Notre Dame with a sizable cadre of pro-lifers, many pushing strollers containing baby-dolls smeared red to indicate the blood of the unborn slain daily in abortion. Others held signs saying,“I regret my abortion”.

The protestors peacefully walked onto Notre Dame’s campus praying together the Rosary.

Upon entering the campus, Keyes was arrested for trespassing by Notre Dame University police.

Keyes held his rosary as he was handcuffed from behind. About 15 others were handcuffed and arrested with him.

One woman, who was off to the side praying the Rosary, and not formally part of the protesting group, was thrown off the campus by University police.

Dr. Keyes states his intention is to witness to the truth, and urges many others to join the protest at Notre Dame “until the South Bend jail is filled to overflowing...”

I spoke with Mr. Keyes shortly before he entered the campus.

He expressed to me his belief that we are now in a great winnowing where the wheat will be separated from the chaff. “Evil is on the offensive,” he said, “and when that moment comes, we are called upon to make a choice.”

He gave the example of Obama’s aggressive plan to remove conscience-protection from health-care workers who oppose abortion, so that those who object to abortion on moral grounds will either have to participate in these procedures or leave the profession.

“If he is able to fulfill that intention”, said Keyes, “then every single person in the medical community will have to make a choice to stand with Christ or against Him.”

“At the end of the day”, said Keyes, “I think Obama is just part of the truth that the law of God and the truth of Jesus Christ is as a sword. It divides.”

He noted many modern Christians, Church leaders and academies are “living a lie”, in that “they pretend the Christian does not have to choose. But Christ said you are either with Him or against him. There is no middle ground.”

Local resident Michael Chabot explained his reason for taking part in the protest.

“As long as Our Lady is on the dome at Notre Dame, she is being publicly dishonored.” said Mr. Chabot. “And as long as Notre Dame tries to hide under the veneer of a Catholic identity or character, then I join these protests to do what Pope Leo XIII said we should do, tear the mask off and expose them.”

He noted that Notre Dame “will welcome to the university campus a man who represents the most abominable and extreme commitment ever known in US politics to destroying the God-given right to life of innocent human offspring.”

“With their actions and the ‘honor’ they confer upon Obama,” said Keyes, “they will actively promote the lie that it is possible to dishonor God blatantly and unashamedly, yet be somehow ‘honorable’ in the eyes of those who profess faith in Jesus Christ.”

Noting pro-life leader Randal Terry’s recent arrest at Notre Dame, Keyes said the university has “declared it an offense to peacefully demonstrate the evil of abortion. They have declared it an offense, prayerfully to bear witness to truth on a campus supposedly guided by and subordinate to that truth.”

He then declared his intention to protest.

“I will go to South Bend . I will step foot on the Notre Dame campus to lift up the standard that protects the life of the innocent children of this and every generation. I will do it all day and every day from now until the Master comes if need be, though it mean I shall be housed every day in the prison-house of lies and injustice that Obama, Jenkins and their minions now mean to construct for those who will never be still and silent in the face of their mockery of God and justice, their celebration of evil.“

Urging others to join him, he said, “If this be trespass, then forgive us our trespasses and join us in trespassing until the South Bend jail is filled to overflowing with witnesses to truth; filled beyond capacity; filled until we break the most onerous shackles of all the ones that bind the heart and mind to evil and our nation to the path of its destruction.”

The protests at Notre Dame have being going on for the past three weeks, and continue to escalate as we file this report.

To date, 71 Bishops have spoken out against Notre Dame’s invitation to President Obama.