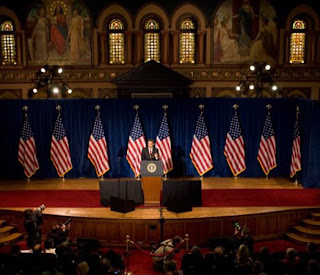 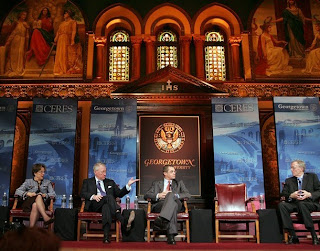 At the request of the White House, Georgetown University covered up
all the symbols in Gaston Hall, before the Great Man spoke,
including IHS, the millennia-old monogram for the name of Jesus
Christ.

Ignatius of Loyola, founder of the Society of Jesus, had adopted
the monogram in his seal and it became an emblem of the Jesuit order.

When it comes to rendering unto Caesar, Georgetown is not going to
be outshone by Notre Dame, which stole a march by offering the
nation's avatar of abortion a doctorate of laws degree, honoris
causa.

Actually, it is regrettable the IHS in Gaston Hall was not covered
up in shame the first week of Lent. For that week Georgetown's
feminist and homosexual clubs, such as GU Pride, put on a Gomorrah
festival about alternative lifestyles called "Sex Positive Week."

Monday, according to The Newman Club, featured a speaker for Black
Rose, which "provides a forum for many different expressions of
power in love and play. This can include dominance & submission,
bondage and discipline, fetishism, cross-dressing, to name a few."

Saturday's talk was by a pornographic film director and was titled
"Relationships Beyond Monogamy."

At Loyola of Chicago that week, the Student Diversity and Cultural
Affairs Office presented "Brother to Brother," a film the Newman
Society reports, about "a homosexual African-American who is
transported in time to cavort with the allegedly homosexual
Langston Hughes."

The movie is said to be part of "a semester-long 'Color of Queer
Film Series,' sponsored by the university."

At Catholic Seattle University, that first week of Lent was
"Transgender Awareness Week," featuring a "session on allegedly
transgender Bible heroes and heroines and 'Criss-Cross Day' where
students are encouraged to 'come dressed for the day in your best
gender-bending outfit."

This is surely anecdotal evidence to confirm Newsweek in the
conclusion reached in its cover story of Holy Week, "The End of
Christian America."

Indeed, not only are many once-Catholic colleges and universities
now wandering in what Pope Benedict XVI calls a "desert of
godlessness," Catholic belief and practice are not remotely what
they were before Vatican II. Where three-fourth of Catholics
attended mass weekly in the 1950s, today it is one-fourth. A third
of all Catholics raised in the Faith have fallen away.

One in ten American adults is a lapsed Catholic. Catholicism's
quarter of the population is maintained only by mass immigration
and, secondarily, by conversions.

Self-identified Christians in the United States have fallen from 86
percent of the population in 1990 to 76 percent today. Those who
say they have no religion have doubled as a share of the nation
from 8 to 16 percent. Where 69 percent of Americans said we are a
Christian country in 1990, only 62 percent say that today.

America is being systematically de-Christianized and secularized.

For the social, moral and cultural revolution of the 1960s, rooted
in non- and anti-Christian beliefs and values, has captured the
culture, and converted many of the young. Among Americans 18 to 29,
a fourth profess to be atheist, agnostic, or of no religious faith.

The figure is surely higher among the college young.

Second reason for the triumph of secularism is that it long ago
captured the Supreme Court. Since the Everson decision of 1947,
justices have expunged Christianity and all its books and symbols
from the public square and public schools.

Voluntary prayer, the Ten Commandments, Bible reading, Christmas
plays and carols, Nativity scenes, Easter vacation, before-game
prayers, benedictions at graduations -- all have been ordered
terminated by unelected judges -- against the will of the majority.

Abortion on demand, too, was imposed by judicial fiat.

Thus, as America ceases to be a Christian country, it is ceasing to
be a democratic one.

Consider. In every referendum in 16 states, where homosexual
marriage has been on the ballot, majorities ranging from 52 to 86
percent have voted to outlaw it as an absurdity and an abomination.

Yet, in Massachusetts, California and Iowa, unelected judges have
imposed it, as they will in other states, regardless of what the
people want or how the people vote. For secularism has become the
established religion of the American state and judges are the high
priests of the new order.

Yet, one wonders if they know what lies at the end of the road upon
which they have set the nation.

For five decades, Americans resisted Godless Communism. If they
come to realize they did so to save Godless Capitalism, or Godless
Socialism, what happens to loyalty and love of country?