Showing posts from November, 2020
Show all

Bastard Mass, Bastard Sacraments, Bastard Priesthood: A Reader Reminds Us of 52 Years of a Graceless NewChurch. Advice? Get Out!

Dear Peter,  I just read your latest post. I have been pondering this for some time.  I wonder if a different approach, or an additional one, might be needed. The one thing no one talks about is that it is nigh on certain that the rite of episcopal consecration introduced by Paul VI in 1968 is invalid.  (Also, the rite of priestly ordination is also doubtful because of the alteration of the form of the sacrament specified by Pius XII.) Father Cekada's articles about this argued this, and his points were never successfully rebutted. But after that debate around 2005-2006, everyone just let go of it, to continue pointing out the endless accumulation of anecdotes of heresy and apostasy. Anyone under the age of 30 in 1968 is probably unaware of this, never heard of it.  Most Catholic men of good will who believe in Christ have no idea that the men filling the posts in the hierarchy are almost certainly laymen; that the apostolic succession bids fair to nearly disappear, and with it t
Post a Comment
Read more

"The Last Letters of Sister Lucy" - In HD Authenticated. Not Forgeries. Sister Lucy was a true flower of the Carmelite Order.

Help us collect the seed money for a Sister Lucy Truth Documentary/Movie. If we "set the world on fire" with this information we will "smoke out" the Imposter Deniers.

Rad Trad Wackadoodle Finally Listens to 2018 Video in Which Both Taylor Marshall and Timothy Gordon Dismiss the Idea of an Imposter Sister Lucy as "Not Needed." "Not Needed" By Whom? Reality or those who Make Money Off the Novus Ordo Hegelian Dialectic?

Dr. Chojnowski: Since when is something not true because it is "not needed"? Since when do you use such a phrase when dealing with the question of whether something IS OR IS NOT. Is the woman who was Sister Lucy of Fatima pre-1967 the same woman as the one who appeared with Paul VI and John Paul II and on many other occasions until 2005? Philosophically speaking, does Sister Lucy I and Sister Lucy II have the same act of existence? If they did have the same act of existence, they would not have had two distinctly different bodies that can be identified as such by an eight year old.  The discussion of the "wackadoodle" theory of the Two Sister Lucys begins at the 28 min mark and goes to about the 30 minute mark. During this 2 minute dismissive segment, Marshall and Gordon use the odd words "not needed" when discussing the now scientifically verified fact that Sister Lucy I and Sister Lucy II are not the same person.  sisterlucytruth.org Of course, the inter
4 comments
Read more

Rad Trad Thomist is Back! Dr. Jesse Russell Calls Out What Many Have Seen in the Last 5 Years. Traditional Catholicism being Hijacked by Novus Ordo Apologists.

McCarrick Report Puts Primary Blame on "Saint" John Paul II and, even, (gasp!) Vigano for not Investigating. There was another FRAUD JPII did not Acknowledge but in fact USED. 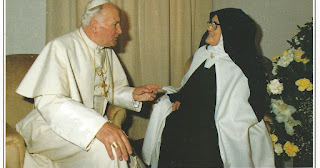 But, this monumental scandal does not involve sex so the only ones we should hear from are the crickets! For the "report,"see sisterlucytruth.org https://www.ncronline.org/news/accountability/vaticans-explosive-mccarrick-report-largely-places-blame-john-paul-ii
Post a Comment
Read more

Sister Lucia of Fatima and the Woman who Replaced her: The 'Sister Lucy ...