Showing posts from June, 2019
Show all

Long-Standing Fatima "Consecration of Russia" Narrative Implodes as Handwriting Expert Demonstrates 1980 Letter from "Sister Lucy" to Fr. Umberto Pasquale is Definitely a Forgery. Whatever the Real Sister Lucy Knew about the Requested Consecration of Russia DOES NOT Appear in this Letter. Fatima Center, Are You Listening? Report from Bart Baggett to be Posted Imminently. 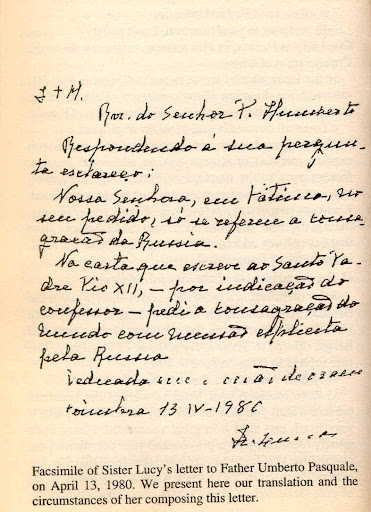 On April 13, 1980, Sister Lucy replied to Fr. Umberto's question regarding the form of consecration that Our Lady of Fatima requested:
Link to a now disproven Fatima, Sister Lucy, and Consecration of Russia Narrative: https://www.nuestrasenoradelasrosas.org/news1/SisterLucyConsecrationOfRussia.htm

New Handwriting Analysis Report Shows that Signatures from 1927 to 1954 of Sister Lucy DO NOT MATCH UP AT ALL WITH SIGNATURES FROM 1967 AND 1969 Documents. Proves that the "Sister Lucy" Operating at this time --- the years of her supposed speaking about "Diabolical Disorientation" was Engaging in Forgery or Providing the Official Face Behind Which was the Forgerer. Report Release Imminent. 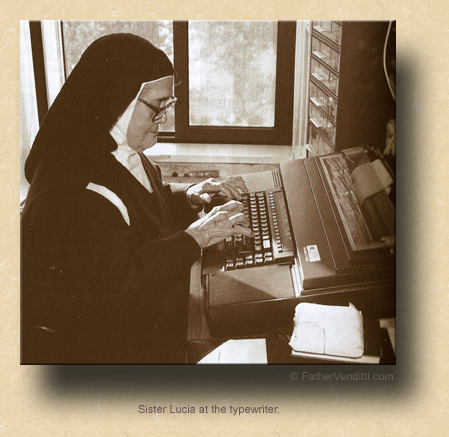 Revised and Updated Edition of Handwriting Analyst Declaration in which 1969 Letter of "Sister Lucy" Advocating Submission to Paul VI is Proven to be a Forgery. Soon to be Released on SisterLucyimposter.org. Includes Analysis of the Purported Third Secret Released in 2000. Socci's "4th Secret" Looking More Plausible. Folks, if Sister Lucy was around in 1969, she would have been able to write her own letters. 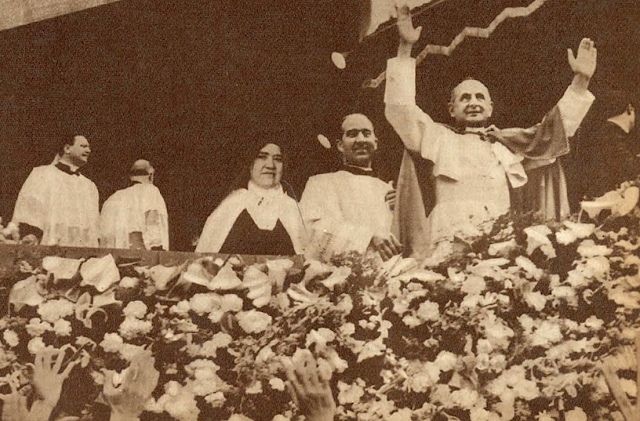 The letter which Bart Baggett has definitively analyzed, translated above, has proven to be a cleverly attempted FORGERY. Obviously, Paul VI had not finished using the persona of "Sister Lucy" to shut down opposition to his agenda after May 13th, 1967. Notice that in a letter of thanks to a man who gave a gift to the convent of Coimbra, she spends 80% of the letter telling you to obey probably the greatest revolutionary and Modernist in the history of the Catholic Church. Rather than being the leader of the opposition or should we say "prophet of doom," "Sister Lucy" 1969 is Paul VI's greatest defender, urging complete obedience to one who speaks for God and to object to whom means that you are separated from the Vine of the Catholic Church and face the Fires of Hell. The importance of this find cannot be overstated.

The Revised version of the legal declaration by Mr. Bart Baggett will be released shortly on sisterlucyimposter.org

Sister Lucy Truth Update: Michigan State Facial Recognition Lab Finds that Sister Lucy II (post-1967) was NOT Sister Lucy I (pre-1967). How Much Do We Need to Put Out Until the Crickets Stop Chirping? 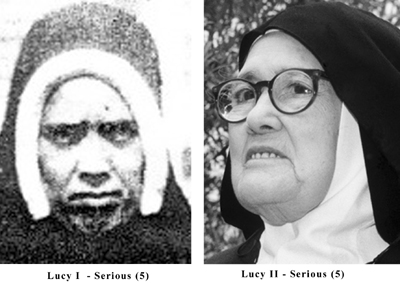 We said that we look at the case in a scientific way and we have. This weekend, we will publish on sisterlucyimposter.org the facial recognition report about Sister Lucy I and II. Michigan State University is the only university in the United States with a facial recognition lab, and Dr. Arun Ross is a leading professional in that field, see his biographical page at https://www.egr.msu.edu/people/profile/rossarun.

Although all of the mysteries surrounding the disappearance of the real Sister Lucy have not, by any means, been settled, it has been exactly one year since scientific facial recognition analysis identified the imposter and in order to further investigate the apparent replacement and to further seek to establish the fact, at least 4 other facial recognition tests were commissioned using a variety of the latest programs and algorithms. Other analysis was done on the pictures, by orthodontists, plastic surgeons, dentists, forensic artists, private investigators, eye doctors and…
Post a Comment
Read more

In His Own Words: John Paul II Wrote that The Consecration and Conversion of Russia Had Already Happened, the Immaculate Heart Had Triumphed already and Fatima was About Him and His Papacy and the Assassination Attempt Against Him --- All the Way Back in 1994! 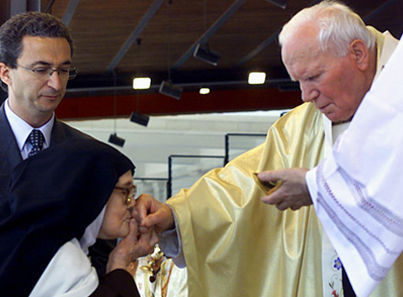 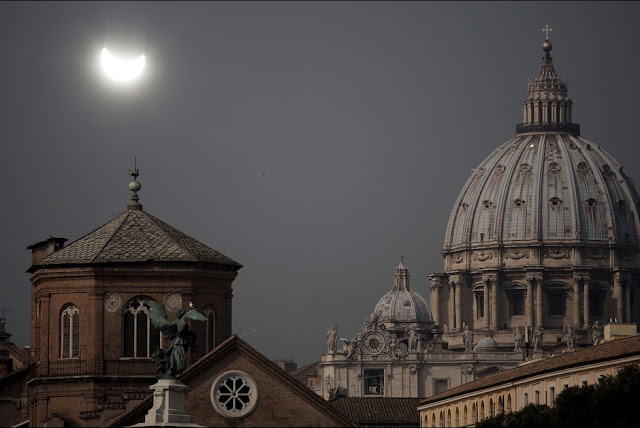 
This gives me the chills. Thanks to the new book by Dr. Taylor Marshall and by the research of an invaluable co-worker at Sister Lucy Truth, it has come to my attention that not only was Our Lady's words at La Salette about the fact that the "Church will be in Eclipse" --- there, but darkened and seemingly not there, for a "moment" (read, at least 60 years and running) --- but that Our Lady seems to have indicated to us the actual exact time in which such an "eclipse" would happen. During an eclipse over Rome! Of course, as we know, or at least as we should know, on the previous day, October 26th, 1958, the Feast of Christ the King, there was 5 minutes of white smoke that came bellowing from the Conclave that was electing a successor of Pope Pius XII. This went so far that Vatican media had announced that a pope was elected. N…
11 comments
Read more

Elizabeth Warren Cedes the 2020 Election by Demanding Reparation Payments to Same-Sex "Married" Couples. Other Democratic "Reparations" Shenanigans ensures that a White, Straight, Old Guy Will be President in 2021. 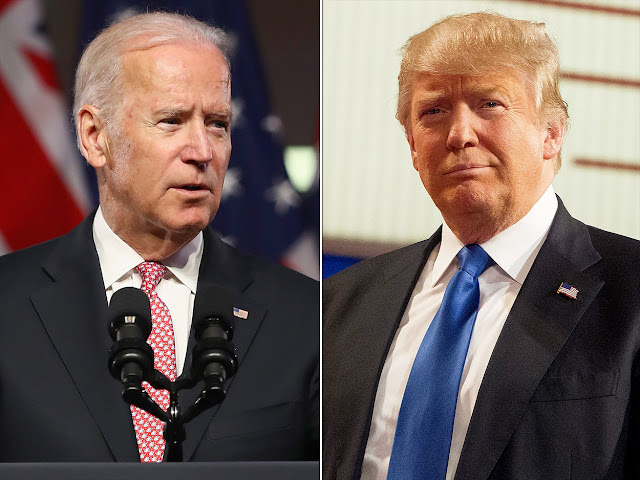 RadTrad Thomist: Since I was in the cradle and being brought to work in political campaigns by my parents --- the first being in the the Mayoral Campaign of Paul Manafort, Sr. (Father of the infamous Paul Manafort, Jr. my 3rd cousin) --- I have been an active participant in the United States Political Process. With the demands for "reparations" being proposed --- a new type every day --- to be paid by American taxpayers to the tune of 10s of millions of dollars --- I can tell you that they will not go for it and it will be one of the millstones around the necks of some of the more left-wing Democratic candidates that might give them a flash in the pan moment among the haters of Western Christian Civilization, but will ultimately be bring about their defeat. No matter the state of the now pricked asset bubble created by the Federal Reserve since 2008. People are just not going to go for it. And they are not going to go for it in a big way. After the articles about Elizabeth W…
Post a Comment
Read more 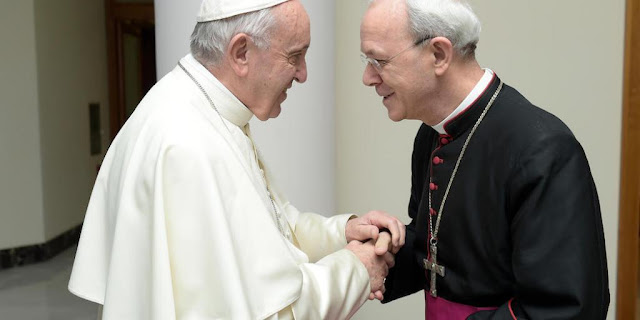 "We got them Holy Father, Just Give Me a Little More Time." "Your Excellency, Once That is Done, We Can Find A
Nicer Place For You Than Kazakhstan.....Hegel will win in the
end, my son, the Pope Emeritus has assured me of this."

Dr. Chojnowski: Isn't it strange how Francis can allow Athanasius Schneider to regularly participate --- along with the "ever loyal" FSSP --- in the "Catholic Identity Crisis Conference," including the one this year in November 2019, even though the conference is organized by Michael Matt a person who regularly slams and rejects the "moral authority" of Francis? Is there something up? If you check out the Wikipedia entry on Schneider, you find that he was "consecrated" by Cardinal Sodano of Fatima Third Secret of 2000 fame and he is part of an order called Canons Regular of the Holy Cross of Coimbra. Anything remotely to do with the Carmelite Convent of Coimbra that has produced a forged tex…
5 comments
Read more

Who Cares? The Remnant Moderator (Michael Matt?) Excises the Papacy from the "traditional Catholic Religion." Horrible Question to the 20,000 Pilgrims. Who do you see as a Rock of the Catholic Faith? Michael Matt's Remnant or "the Vatican of Pope Francis". Another little question. I thought "Counter-Revolutionaries" were Ultramontanists not Gallicans? 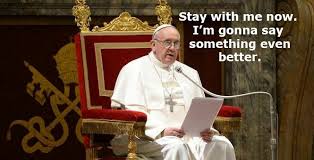 How many of those 20,000 still believe that Bergoglio is the legitimate pope?

Remnant Moderator. Wilf Netherton•a day ago
Who cares?
https://www.youtube.com/watch?v=QCupLRVQ2H0
"to let the whole world know that faithful practicing Catholics who go to Mass every Sunday no longer accept the Vatican of Pope Francis as a moral authority on anything."

Dr. Chojnowski: Is the Remnant Romanticism, displayed on the "annual Chartres Pilgrimage" moving the "resistance" to the Conciliar Church from Gallicanism to full-scale Protestantism? Would even King Louis XIV say what Michael Matt said in the above clip (around the 20 min. mark) in which the teaching authority of the man he is certainly calling pope is completely rejected and the independence of "traditional Catholics" is being asserted? Are we assuming the mantle of High Church Anglic…
5 comments
Read more 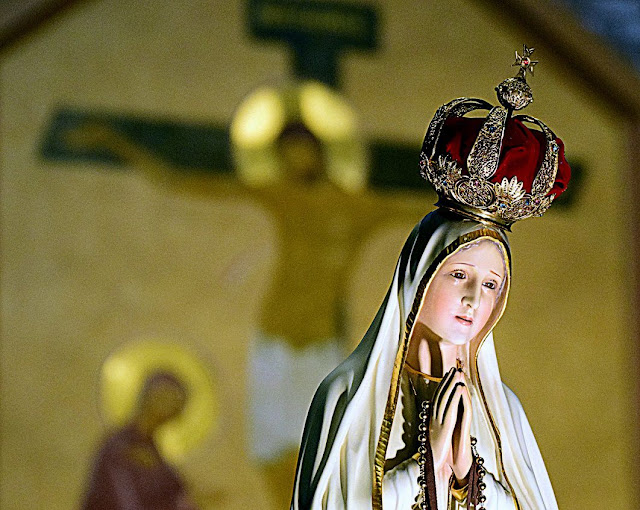 FATIMA NEWSLETTER
Apparition of June 13, 1917
As recounted in Sister Lucia’s Memoirs
The Word Spreads The 13th of June, feast of St. Anthony, was always a day of great festivities in our parish. On that day, we usually let out the flocks very early in the morning, and at nine o’clock we shut them up in their pens again, and went off to the festa.
My mother and my sisters, who knew how much I [Lucia] loved a festa, kept saying to me: “We’ve yet to see if you’ll leave the festa just to go to the Cova da Iria, and talk to that Lady!” On the day itself, nobody said a single word to me. Insofar as I was concerned, they acted as if they were saying: “Leave her alone; and we’ll soon see what she’ll do.”
I let out my flock at daybreak, intending to put them back in the pen at nine, go to Mass at ten, and after that, go to the Cova da Iria. But the sun was no sooner up than my brother came to call me. He told me to go back home, as there were several people there wanting to speak to me. He himself st…
1 comment
Read more

Meditation on the Holy Season of Pentecost from a Reader. Come Holy Ghost! Fill the Hearts of Your Faithful and Enkindle in Them the Fire of Your Love. 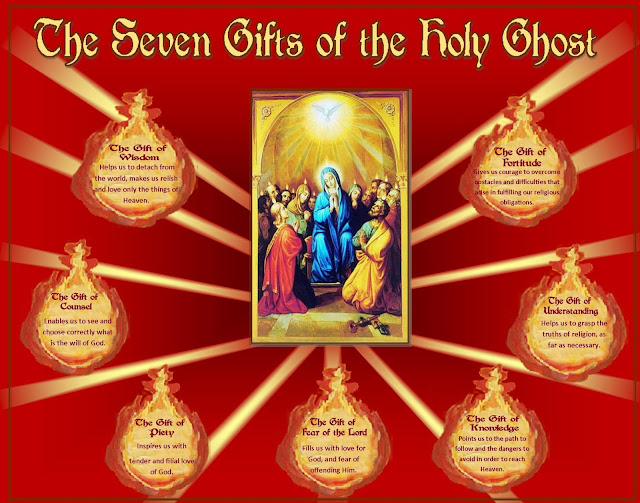 Continually through the public life of Our Lord, we see the weakness of the Apostles and the great need they had for Our Lord to be present at all times in order to keep them from losing all hope or falling into temptation, for example the Storm at Sea when Our Lord had fallen asleep and at the Court of the Sanhedrin when St. Peter denied Him three times.

After the Ascension, the Apostles and Disciples all hid in a house, in the company of Our Lady, preparing for the Coming of the Holy Ghost, Who Our Lord promised to send. The Apostles huddled together, afraid of the Jews and Romans. Look at these men, hiding, trembling, not fully understanding the truths Our Lord had left them. Are these truly the men Jesus chose to represent Him?

As usual, God in His infinite mercy, provided, as He said He would, and sent to them the Holy Ghost in the form of tongues of fire. God sent Love bearing Seven Gifts to a world so full of hate. This moment was the first Confirmation, when the Apostles were m…
3 comments
Read more

Pentecost 2019: Remembering the Holy Ghost. Guarantor of Infallibility in the Church and Craftsman of Souls. 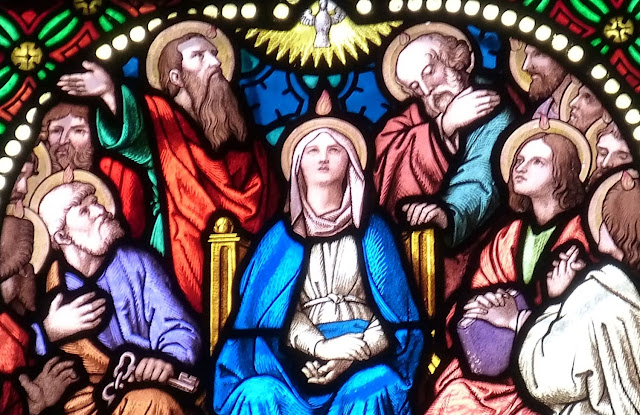 The Craftsman of Souls: The Holy Ghost and His Gifts Dr. Peter Chojnowski
Instinct. Normally this term is used to express a nonrational, unlearned condition which facilitates behavior which is both in accord with nature and which is beneficial and, even, necessary to the creature who possesses these inclinations. In the world of nature, it is the nonrational animal kingdom which is most characterized by it reliance on instinct. Man, as a rational animal, possesses a modicum of instinctual responses which all relate to the preservation of his bodily integrity, e.g., the repulsion which expecting mothers experience when in the presence of a certain type of food which could be, potentially, toxic for her unborn child. In a previous article, I have written of St. Thomas Aquinas' consideration of the most basic inclinations of our human nature, which constitute the very matter of the Natural Law.1 For St. Thomas, inclinations are a law revealing the inner ratio and purpose of man's …
2 comments
Read more
More posts