Showing posts from July, 2009
Show all

- July 13, 2009
Pharmacists lose pill ruling By Carol Williams, LA Times Pharmacists are obliged to dispense the Plan B pill, even if they are personally opposed to the "morning after" contraceptive on religious grounds, a federal appeals court ruled Wednesday. In a case that could herald judicial policy across the Western states, a supermarket pharmacy owner in Olympia, Washington failed in a bid to block 2007 changes to pharmacy regulations requiring all Washington pharmacists to stock and dispense the contraceptive. Family-owned Ralph's Thriftway and two women employed at other pharmacies sued Washington state officials to assert that their Christian beliefs prevented them from dispensing the pills that can prevent implantation of the recently fertilized egg. They claimed that the new regulations would force them to choose between keeping their jobs and heeding their religious objections to a medication they regard as a form of abortion....On July 8, 2009, a 3 judge panel of the 9t
Post a Comment
Read more

Benedict's Globalist "Solution" is One World Government with Totalitarian Powers. Where is the Principle of Subsidiarity? See Comments Below. Why do we have the Pope agreeing with Al Gore and Barack Obama? Pope calls for a "global authority" on economy By Philip Pullella VATICAN CITY (Reuters) - Pope Benedict called on Tuesday for a "world political authority" to manage the global economy and for more government regulation of national economies to pull the world out of the current crisis and avoid a repeat. The pope made his call for a re-think of the way the world economy was run in a new encyclical which touched on a number of social issues but whose main connecting thread was how the current crisis has affected both rich and poor nations. Parts of the encyclical, titled "Charity in Truth," seemed bound to upset free marketers because of its underlying rejection of unbridled capitalism and unregulated market forces, which he said had
1 comment
Read more

True unemployment rate already at 20% Posted Jul 06 2009, 01:16 PM by Anthony Mirhaydari Really, how hard is it to find a job? Was June's horrid numbers, in which 467,000 people lost their jobs compared to 345,000 in May, a one-time fluke? Or does it mean that all those Wall Street economists who believe the economic recovery is starting are dead wrong? Not to scare you, but the situation is actually worse than it seems. Over the years, the government has changed the way it counts the unemployed. An example of this is the criticized Birth-Death Model which was added in 2000. The model is designed to account for the birth and death of businesses and the resultant lag in survey data. Unfortunately, the model doesn't work that well during economic contractions (like we have now) and consistently overstates the number of jobs being created each month. John Williams of Shadow Government Statistics specializes in removing these questionable tweaks to the government's statis
Post a Comment
Read more

Bishop Williamson writes of "Restructuring in State, Economy, and Church"

SATURDAY, JUNE 27, 2009 Eleison Comments CIII: 81/121 Re-Structuring Tomorrow, or the day after, there is hardly a box outside of which it will not be necessary to think. In Church and world, the mentalities and structures of so-called “Western civilization” are collapsing around our ears. Still the mass of Western souls are preferring to slumber on in their audio-visual dream, but reality is closing in all the time – they may awake not before they are shackled into the New World Order. The USA has for nearly a century acted as the shield and sword-bearer of “Western civilization” . Now its financial, economic and political power structures are melting down in a welter of greed, corruption, selfishness and dissolution slung between Wall Street, New York, and Washington, DC. However -- let it never be said too often – “We the people” have only ourselves to blame. We have wanted the cause: godless materialism. Now we must live with the effects: the final breakdown of fractional reser
Post a Comment
Read more 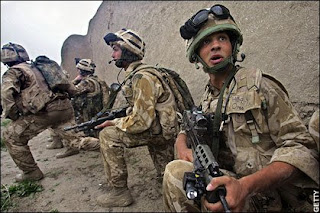 OBAMA HAS NO LEGAL AUTHORITY TO ESCALATE AFGHAN WAR AND IS CREATING “HUMANITARIAN CATASTROPHE” IN PAKISTAN By Sherwood Ross July 3, 2009(Special)---President Obama has no legal authority either from the United Nations or the U.S. Congress under the War Powers Resolution(WPR) to escalate the war in Afghanistan, a distinguished professor of international law says. “President Obama’s surge of 21,000 troops now engaged in combat in Afghanistan comes on top of the 60,000 we already had there,” says Francis Boyle, professor of international law at the University of Illinois College of Law at Champaign. “The Obama Administration simply ignored Section 4(a)(3) of the WPR when it announced the escalation,” Boyle noted. “U.S. armed forces are in Afghanistan originally pursuant to WPR. Its requirement that the President get Congressional consent on substantial enlargement (of forces) was put there to deal with the kind of gradual escalation we saw in Viet Nam that eventually led to 550,
Post a Comment
Read more
More posts